This is the most interesting Boss you will be fighting between Level 10 - 25, because of his spectacular AOE attack, compared to most other bosses in the early levels of this game.

First of all, very important to note, you can find a save point right next to the boss, near a wooden shed. Save there, and as long as one of your party is still alive, you can respawn there after death and immediately go back to join the fight, without the Bosses HP resetting.

With that out of the way, this battle is again pretty standard with its Tank / DPS / Heal set up. However one big difference is the before mentioned AOE attack this boss can use: 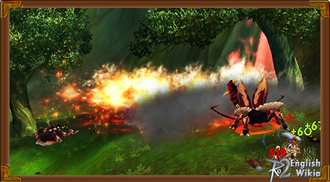 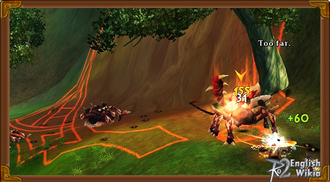 A red marker will appear on the ground in front of him, giving you about 3 - 5 seconds from escaping out of it, the safest place would be behind him.

After this flames will erupt from the ground, causing massive damage to everyone still standing within the radius. As a comparison: Our entire Level 25 party was wiped out with one hit from this attack.

Besides this it is a rather straight forward battle and should not cause you too much trouble.