The guild system of Ragnarok Online 2 (LoTS) was made to allow the formation of communities with guild members and meet new players.

Meet the Guild Caretaker Chamblee in each city. 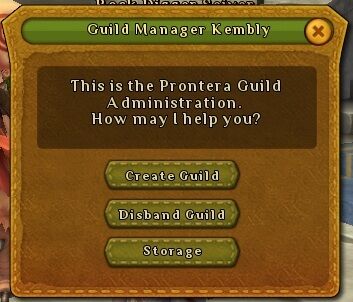 In the first creation of a guild, it can recruit 20 people including the guild master. The guild recruitment can increase to 100 people in higher guild levels.

To create a Guild, the player should meet the following requirements:

If the requirements are met, you can enter the name of your desired guild. Guild names cannot exceed 10 letters, cannot contain profanity and the guild name can not be used by any other guilds. If anything goes wrong, through the Concierge NPC guild the guild can disbanded.

The requirements to disband the guild are as follows:

1:    No other members in the guild, other than the guild master. 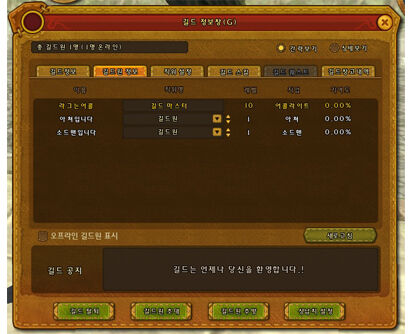 After creating a guild, the guild master can recruit and assign members who can invite people to the guild. The player should accept the invitation to join the guild by pressing [OK] button during an invite. You cannot invite people who has already joined a guild. 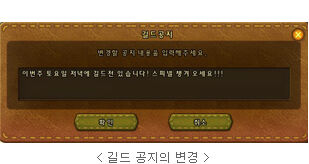 Ranked members who has the ability to change the notice can modify the contents of the notice set by the guild to the members.

A notice has a maximum of 50 letters, and press the [OK] button after completing the changes to guild notice to send the message to guild chat.

At the (G) [Guild] tab in the Add / Change button to register the emblem.
If the Emblem is in the right location(RO2 folder\Guild) and in the correct format and size "mark.bmp" 32x32 pixels. Emblem can be registered directly in the guild information window, The guild emblem will be seen.

Guild Storage using authorized guild from the guild master can only be used by privileged/ranked members in the guild. At first creation of the guild storage cannot be used. "Prosperity" guild skill should be learned first to put a 20 space that can be increased to 100 space when the guild level and skill increase. Items and gold stored are shared among guild members and only authorized member can take the item out of the guild storage. 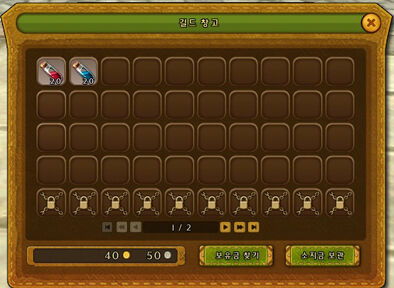 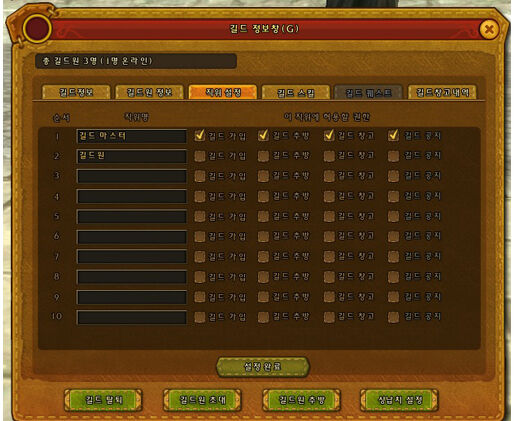 All authority can be assigned during the first creation of the guild. New invited players will be added to a common position that the guild master set.

Guild master status can be handed over to another guild member. To do this, open the guild screen and goto the Position Tab. Once there, instead of changing a users title, you may select "Transfer Guild"

Each member may contribute a portion of the exp they receive from fighting monsters by clicking on the Donate EXP button. You may set this value anywhere from 0% to 50%.