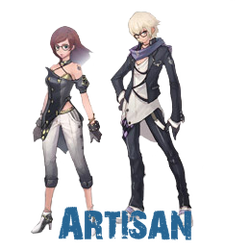 Once a young Artisan had extraordinary skills with his hands and after a great many hardships he was able to apprentice under a famous artisan.However, he soon succumbed to the temptations of bad friends and started replicating bank safe keys, eventually ruining his business and reputation.

For a while he lived a life full of debauchery, but could not forget the joy of creating beautiful accessories with jewels, leather, metal, and cloth, or the production of exquisite arrows and other forms of ammunition like quivers.
Thus he left on a long journey to collect various materials so that he could master his unique skills.

Artisans harvest dead monster skins and Field Cloth to use in the creation of Light armor , Leather armor, Runes, and Accessory.

For Artisan gathers materials such leathers, life-imbued stone-like thing and cottons from dead monsters. It is indicated by small knife and leather bag cursor when you hover over the dead monsters. But item drops are in first priority, so you have to get the item drops first to know if there's any material you can get.

You don't need to buy anything, you just have to kill monsters or gather them from other dead monsters killed by other people. Just see the shining thingy that indicates the object is gather-able for materials. 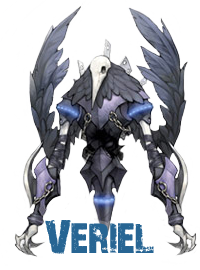 Veriel was the best artisan in the entire continent of Midgard. His future was an undoubtedly smooth road. However, Jibril, who could not surpass Veriel no matter how hard he tried , planned out a terrible scheme to one day destroy Veriel's hands.

Jibril feigns an accident to bring his plan to life, and Veriel loses his hands. The hands are the most important part of the body to an artisan; Veriel, who was no longer able to be an artisan, spent his days in a drunken corrupted despair. Then one day Veriel discovers that the accident that had cost him his hands was in fact not an accident and caused by Jibril. Unable to control his anger Veriel murders Jibril with his favourtie knife, using his mouth to deal the blow.

In the same moment that Veriel killed Jibril the Day of Despair descended upon his city.