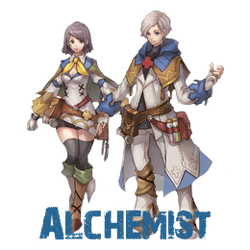 An orphan child wandering around aimlessly starving... it is because of memories like these that people can't stop their obsession with gold.The study of Alchemy began with a greedy desire to discover how to transmute gold to live a wealthy life.

However, the truth is that handmade potions and spells are popular with other adventurers and sometimes even save lives. Potion and spell crafting have become the strength of Alchemists and they continue their research in this after the realization that gold transmutation is an empty myth.

Alchemists harvest Field Herbs and Monster's Liquid to use in the creation of different Potions, Refining Stones, Disassembling Stones. 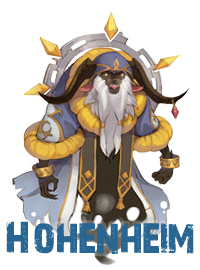 Early on in his life Vulcan established himself as the best blacksmith in the entire content of Midgard. His name was known by all.

Before the great disaster, the City of Magic was named Juno. Hohenheim was the third headmaster of the Magic Academy in Juno. He was the one who created the educational structure of the previously little-known alchemy and brought it up the regular class-level of magic studies. One day he suddenly disappeared, leaving his great accomplishments behind. The last alchemy theme he researched was the fusion of human and demon. The corpse of Baphomet, the demon that shook the entire continent of Midgard with fear, was obtained by Hohenheim, who then attempted a fusion of human and demon with it; the human half of the experiment utilizing his own body. He wanted to combine the great magical powers of the Baphomet into the human body to create a new race.

The preparations of the experiment were done and the perfect alchemy formula was established; everything seemed to be going well, but the result of the experiment was devastating. Hohenheim's soul was instead fused into Baphomet's body. Hohenheim, who lost his rationality at the unexpected result, ran away into the Geffen forest to escape being destroyed by the Magic Academy's researchers, who thought he was just another monster. Hohenheim was filled with endless frustration. "If I could revise the formula just a little but more, just a bit, the alchemy would have succeeded..."

Secluded in the forest, Hohenheim continued his research, unbeknownst to others, until he silently met the Day of Despair.